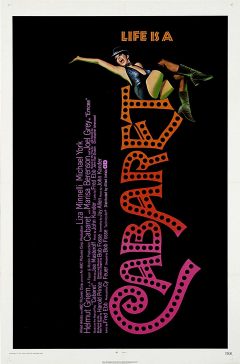 "There is a bohemian buzz that echoes through the boulevards of Berlin, but in the background is the slow and inexorable cancerous growth of the Nazi party. Based on the blockbuster Broadway show, Bob Fosse’s classic movie tells the story of American Sally Bowles, performer at the Kit Kat Club, as she falls in love with the sexually ambiguous Brian. Their love and loss, set to unforgettable Kander and Ebb songs, gives us a center that cannot hold as everything around them falls apart as Germany slips into fascism."

This is a ticketed event. Tickets can be purchased here!