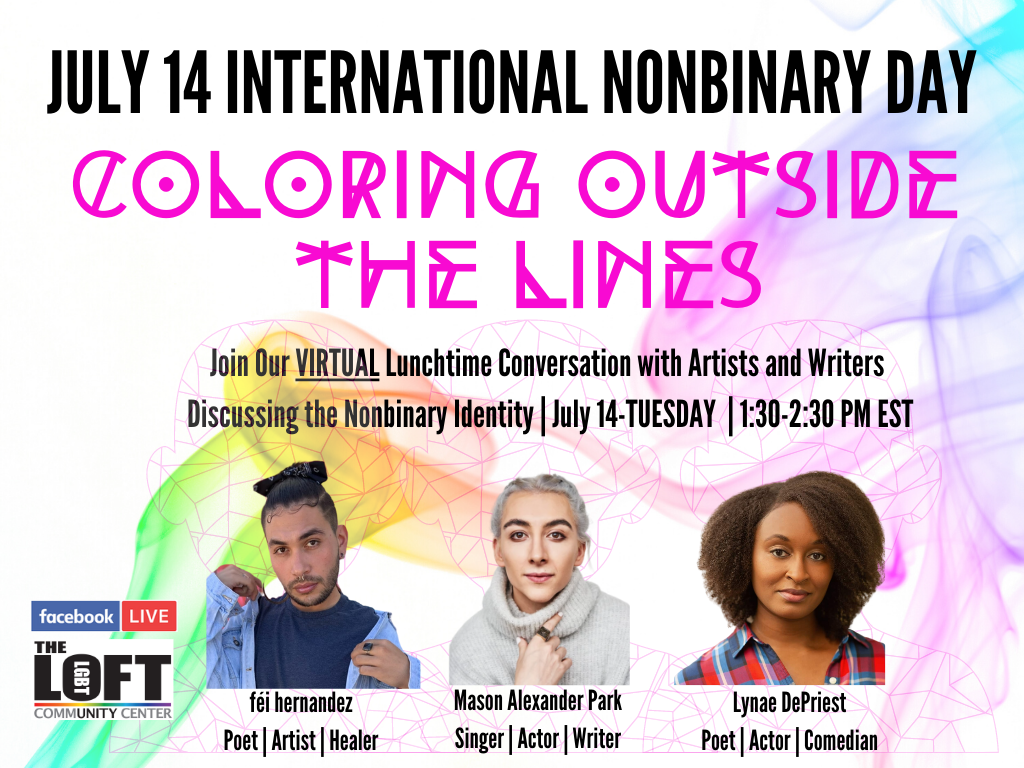 The LOFT welcomes you to a virtual lunchtime event celebrating International Nonbinary Day: COLORING OUTSIDE THE LINES, a celebration of nonbinary identity in the arts.  Join us and our featured artists: féi hernandez, Mason Alexander Park and Lynae DePriest as we delve into and explore the intersection of nonbinary gender identity, culture, art, and ideas on the future of nonbinary representation in the arts! All are welcome!

Read more about our artists below:

féi hernandez (they/them) is author of the forthcoming full-length book of poetry, "Hood Criatura". They are an Inglewood-raised immigrant trans non-binary visual artist, writer, and healer. féi is also an Advisory Board Member of Gender Justice Los Angeles and was one of the artists for Forward Together’s 2019 Trans Day of Resilience Campaign. They are a Co-Founder of ING Fellowship which provides mentorship to Inglewood youth working on projects to counteract gentrification and was also a femmetor for the 2019-2020 Seeds of Liberación (SOL) leadership development program for young transgender, gender non-conforming, and intersex (TGI) people in Los Angeles. They are a certified Reiki and Akashic Records practitioner who utilizes a decolonial approach to ancestral energetic healing. féi collects Pokémon plushies.

Mason Alexander Park (they/them) is fresh off of the First Broadway National Tour of Hedwig and the Angry Inch.  Mason can be seen in the upcoming film Before You Know It, such TV shows as Broadway or Bust and Becoming an Artist on PBS, or iCarly and Bucket and Skinner's Epic Adventures on Nickelodeon. Mason was featured in the podcast musical Loveville High as the series' Bowie obsessed genderqueer high schooler, Jendrix. Most recently, Mason starred as the Emcee in the Olney Theatre Center's critically acclaimed production of Cabaret (for which they earned a Helen Hayes Award nomination for Best Actor in a Musical) and also starred in the Pulitzer Prize-winning play I Am My Own Wife at the Long Warf Theatre from January to March 2020

Lynae DePriest, aka Thoughtress (they/them) is a black, queer, non-binary poet, actor, comedian, host and producer whose artistry focuses on breaking down the code of silence tangled around their blackness and finding ways to use their experiences to build community. They are a Co-Producer of Thank You for Coming Out, Co-Host of We Are Trans and on the Curatorial Team for Poetic Open Sessions with Poetic Theatre Productions. Follow them on IG @LynaeDePriest and @Thoughtress for more info.
WHEN
July 14, 2020 at 1:30pm - 2:30pm
WHERE
VIRTUAL